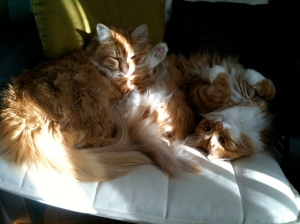 In my first year of disc golf, I played through one group of local guys who asked me, “Do you wanna play dubz?” I figured, “Yeah- why not?” The only problem was, I had no clue what ‘dubz’ were…

It’s doubles. Yeah. I know that now. But besides that, I haven’t learned much more about it. Playing a ‘best-shot’ doubles round will almost always lead to better scores compared to singles, since your team gets a second chance to throw every shot. Beyond that though, I wonder about the technique of a great doubles round. I’ve certainly witnessed the chemistry of a great doubles team. Whenever one player throws an errant drive, the other player always seems to respond. Every time one player misses a putt inside the circle, the other player steps up and sinks it. They’re always high fiving, and they always seem to boost each other’s confidence with each shot.

I’m signed up for a charity doubles tournament in November, and with the obvious lack of sunlight and disc golf rounds, I’m over-thinking it and trying to figure out an exact strategy for how to play our best. However, the closer I look at it, the more I realize that doubles teams don’t have an “exact strategy” at all. The best teams basically carry each other at the perfect times, and allow for the most high percentage shots.

What if you’re playing random dubz though, and your partner isn’t someone you know, or chose? In this case, I actually DO think there can be specific strategy to the doubles round. The first choice to make is obviously who throws first. This is a personal choice. Are you better under pressure? Are you better with no pressure? Whichever player is more comfortable with pressure should probably throw second, especially on the harder holes- as the first player could hit an early tree, or simply mis-throw. When your team’s first drive is sitting behind a rock 20 feet off the tee box, there is a bit more pressure on that second drive.

After the drives, there are many players who like to let the person who threw the shot follow the shot. In other words, if you park a drive at the basket, you put the final putt in. This makes a lot of sense to me, because it allows for a good flow to the round. As they say, “Ride the hot hand!” Eventually though, there comes a time when the other player could get bored. This can happen a lot more when you’re matched up with a player who has a vastly different skill level- and it can help team morale if you switch it up. Personally, if I’m playing with a guy who’s throwing ‘lights-out’ I have no problem letting him ‘go on with his bad self,’ after all, it’s OUR team that’s winning. In either case, as long as the team is in agreement, both methods have merit.

Thinking back to my least successful pairings, and attempts at best-shot doubles- I recall two main problems that parallel these issues. The first was team morale. If you aren’t open with one another, and able to communicate your strategies and agree on them, you probably won’t win. Attitude, confidence, and performance are all closely linked. How many great rounds have you had while arguing with your partner? Or while basically giving your partner the silent treatment? The second major issue I remember was not playing to our strengths. I played one round with a good golfer as my partner. He was significantly better than me, but he sort of took the reigns as the leader and stuck with the same plan the entire round- and we got trounced. The whole round was essentially him throwing a bad shot (he was trying too hard, thinking he had to make up for my lack of experience) and me trying to impress everyone by throwing an amazing shot (instead of laying up or throwing a basic high-percentage drive). In retrospect, if we had let me go first, I might have thrown some better shots, which could have given my partner confidence in my abilities, and in turn let him play more relaxed.

So that’s what I’ll focus on in November’s charity doubles tournament: morale and strengths. To boost our morale, I will make personalized sugar cookies with our initials on them. And to ensure we play to each other’s strengths during the round, I’ll make my partner take an online personality quiz. This way I’ll know if he is “touchy feely” or “thinky grumpy.” We’re gonna win.