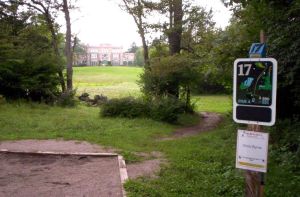 The PDGA Rule 803.08(A) states that “If a disc comes to rest above the playing surface in a tree or other obstacle on the course, it’s lie shall be marked on the playing surface directly below it.” However, it goes on to clarify that a tournament director “…may declare the two meter rule to be in effect for the entire course, or just for individual obstacles.” So if your disc is stuck in a tree, it’s up to the TD to decide if you get a penalty stroke for marking your lie. Of course, this is assuming your disc is stuck above two meters in height.

I played in a doubles tournament a few weeks ago, and the two meter rule was in effect. I threw a pretty decent shot (considering the distance and tee position), RHBH anhyzer into a tree guarding the basket. The basket was 390 feet from the teepad, with the tree about 40 feet in front. I can’t throw a flick that far (or that accurate!) so I decided to try my luck with the Latitude 64 Goldline Bolt. As a side note, that disc feels like I’m cheating when I throw it- it’s so fast and so flippy! Anyway, I got a decent snap on it, but it turned over sooner than I wanted. So when the flight panned out it had nowhere to go except into the tree before the basket. When we got up to the disc, it was about 7 feet high (which is over two meters) resting on some spruce branches. My partner’s disc was too deep in the woods to consider throwing from so we marked mine, took a stroke penalty and moved on. It was a fun day all around, but that penalty stroke kept poking at me.

In all reality, those are the rules, and we have to play by them. There was no surprises, and they’ve always used the two meter rule at that course. It ends up sounding like sour grapes when I complain about it, especially considering my partner and I left about 5 or 6 easy strokes out on the course through sloppy play. Despite the risk of sounding like a whiner, I put up a post on the local message board to see what the reasoning was and how other people felt about it. It got quite the response! Check it out here. The thread ends up becoming a bit of a debate between those who throw overhand and those who don’t. The main reason for the rule seemed to come from the original course design, and the wishes of the Parks and Rec dept to not cut down any spruce trees. They were treated as off limits, so the two meter rule went along with that sentiment.

When all is said and done, I learned an important lesson. I will now keep that rule in mind when throwing at those courses. It had never been applicable on my throws in the three years of playing disc golf, so I always ignored it. Now I can consider it to be an OB area just floating in mid-air, so I will use the necessary precautions. It doesn’t mean I have to like it- because floating OB feels pretty arbitrary when you consider that some courses simply don’t have it. Imagine a TD calling out a random OB rule before a tournament, “…AND JUST SO EVERYONE IS CLEAR, THE YELLOW LEAF RULE IS IN EFFECT!” This of course being the rule when your disc is touching any yellow leaves, you’d be OB. If nothing else, this was the one rule that pushed me over the edge to start carrying a PDGA Rules Book in my bag. It was the third time in less than a month I had to look something up and didn’t have one on me.