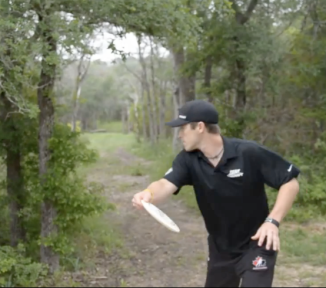 The final two weekends in March had Minnesota native Cale Leiviska winning consecutive tournaments. He took down the Texas State Championship in Houston against a strong field (ten ‘1000’ rated players in Open Division) and then moved on to Austin to win the Non Stop Disc Golf Tournament “Fly Inks Mayhem at Manor.” Both of these were after tweaking his knee during the Memorial tournament to open the season. During the live internet broadcast of the Memorial, it was announced that Cale had a severe injury to his knee and was withdrawing. This, of course, was not entirely true- as he ended up finishing tied with fellow NSDG member Nikko Locastro for 10th place. DG Squared isn’t the source for Cale’s injury specifics, but from what I’ve gathered the knee issue is something he’s planning on playing through this season. It certainly didn’t stop him from winning two tournaments in Texas, and 10th place at the Memorial is nothing to shake a stick at.

He’s been touring with the Non Stop Disc Golf crew, surrounded by Innova sponsored friends Dave Feldberg, Nikko Locastro, and Will Shusterick. If you’ve seen Cale play, you know he’s a Discraft sponsored player. You have to wonder which discs they’d all trade with each other if they were contractually allowed. I mean, who wouldn’t want a Bar-Stamped Buzzz or a Drone? And how can you even play without a Teebird in any plastic? The NSDG idea is more than just a bunch of dudes in an RV. All four of the guys are going full-steam in every avenue they can; whether it’s retailing discs, putting on clinics and tournaments, keeping updated on Facebook & Twitter, or uploading YouTube clips. It’s a welcome sight for hardcore disc golf fans, considering that a year or two ago you had to scrap through google results for one-paragraph long articles about NT tournaments played in other parts of the country. With the way NSDG is set up, if you want information and insight: you got it.

For me, I was introduced to disc golf on a trip to Minnesota. My buddy Erik lived in Minneapolis and convinced me to go down to the DG Park near the Dairy Queen for a taste- Wabun Picnic Area. It’s a tiny 9 hole pitch n’ putt, and I was throwing flick ace-runs in my first round. I was hooked. Soon I was visiting him and playing Kaposia, Blue Ribbon Pines, as well as tons of other local Minneapolis courses. When I read about Cale’s victory at the Minnesota Majestic in 2006, I couldn’t help but root for a guy from the same area as my good friend. Interesting enough, Cale has finished in the top card at the Majestic for 6 consecutive years but hasn’t taken the victory again. Something tells me with these early 2012 wins that his game is on point, and he’s poised to go on a run.  Here’s hoping!

Here’s a few shots of Cale at the tournament he won in Austin.