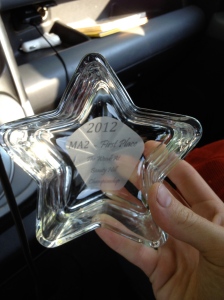 First off- the title is sarcastic. Somehow, when a word is written it becomes impossible to detect sarcasm. I don’t consider playing AM-2 (intermediate) to be a joke, but it’s clearly a stepping stone. Just like Rec; AM-2 is a division that is played because it’s a better fit for your game or skill level.

So I’m an AM-2 Champion, and it feels epic!!!!!!!!!!!!! Actually it’s a lot like my first home run I hit over a fence. I played baseball my whole life, probably hit 20+ home runs, and was a perennial little league all-star; but never hit one over a fence in a game. Until finally, in a church softball league when I was well over 25 years old, I put one about 70 feet over the left field fence. Before I knew it I was sitting back on the bench chewing sunflower seeds. It’s a passing moment, and it wasn’t nearly as profound as I imagined it. Let’s not get too “Doogie Howser Diary Entry” here- or too philosophical… a question remains for me though, “Does winning matter?”

When I think back to all the tournaments I’ve played in, I can remember having the most fun as I watched another guy on my card throw his first disc of the day in for an ace. Two weeks ago when I won the AM-2 division at Beauty Hill, I two-putted on my last four holes of the day. Needless to say, I wasn’t having much fun, but I had built up enough of a cushion for the victory. It boils down to something in the middle for me. There’s definitely a time when you play your best and you’re in the zone. There are also times when it’s pouring rain and you can’t putt your way out of a paper bag, but you’re having fun despite it all. And then there are five other mediocre tournaments in between. How do you handle those tournaments? What carries you through and keeps you playing?

The flight of the disc. A hyzer flip. A huge anhyzer. A spike hyzer that lands two feet from the pin and rolls up underneath the basket. A tricky flick shot with a new disc that worked out perfect. There’s something within the creation of a 6 second flight that keeps me coming back for more week after week. I’m moving up to AM-1 I suppose, but I don’t really care. Last weekend I actually played Pro/Open and finished DFL. I can cross “DFL” off my bucket list at least… but moving forward my goals really have changed. If I wanted to win, I’d stay in AM-2, but all I want to do is throw the disc as perfect as I can. Playing with better players (and practice) is the only way it’s going to happen, so I’m moving up. See you guys at the top… of the mountain… of awesomeness…

This entry was posted in Stories and Miscellaneous and tagged AM2, disc, division, golf, intermediate, tournament. Bookmark the permalink.