Hitting up the Florida Scene! (Thanks Mr. Dger!) 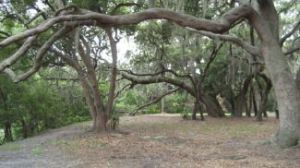 The low hanging branches at Cliff Stephens are a great training tool for level throws!

Well, I’m headed to Florida again. I don’t play as much during the winter months, and can’t wait to visit my Aunt for a long weekend and get some rounds in while wearing shorts! We’ve been lucky out in the Boston area so far- I’ve hardly touched a shovel! But I can’t pretend winter disc golf is my favorite. I’ll PLAY in the winter- and can even be spotted having fun, but a few too many small things bother me, adding up to a less-than-stellar disc golf experience. I’ll just say them quickly, to avoid drawing out the whining: cold hands, cold plastic, cold wind, cold muscles, and did I mention cold fingers?

So in a couple weeks, I’ll kiss those things goodbye for a few days and play Ken Climo’s home course- Cliff Stephens. Then I’ll travel over to Sarasota and play North Water Tower Park. I’ve written a review of North Water Tower Park already, so check it out here if you’re interested. It was a bit of a surprise to me last year, so this year I’m simply looking forward to playing it, and maybe even hitting up a local doubles day on the weekend.

It will be a quick trip, only a few days, so I’m trying to choose my courses wisely, and would hate to waste a trip and drive two hours to a crappy course. On that note, I found a channel on YouTube that is quite helpful. While I appreciate the wealth of info on “DGCourseReview.com,” it’s often not enough to make a decision on whether or not to visit a course. Many of the “off the beaten path” courses only end up with two or three reviews and sometimes only a couple of pictures. This is why I was excited to see links to a collection of videos by “MrDGer.” He calls his channel “Disc Golf Central” but in any case the Florida courses were all on his list. In only about seven or eight minutes I can watch a typical solo round of disc golf on each of the courses I’m considering. This is a great way to make a decision- for example, there is a course called “Lakeview Park” in the Sarasota area that I was considering, but the majority of the reviews were talking about losing discs in the water. Literally every review had some sort of, “I lost four of my favorite discs” sentence, and I was growing weary of making the trip out there. However, once I watched this video by Mr. DGer, I saw that the water hazards weren’t that bad. Of course, if there’s any water, there’s always a chance, but I was almost assuming I wouldn’t be able to play an enjoyable casual round because there was too much water… this was far from the case. In addition to the Florida courses, it looks like he shows courses in plenty of other states. I’m not even sure where he lives, or if it’s just one person/guy doing the videos. It’s a great idea though, and if you’re headed to Florida or anywhere else for that matter, check out his channel and see if he has some course tour videos!