Next Up from the NSDG Tour: Nikko Locastro 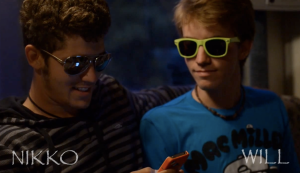 Nikko and Will filming a vlog using questions from viewers… wearing sunglasses.

Missouri native Nikko Locastro took down the A-Tier St. Louis Open this weekend. While Nikko’s talent wasn’t in doubt, there was a slight question mark in the “health” category. Just two weeks ago he was unable to finish the SOKY Open in Kentucky. The only chatter I came across about his 999 score was a reference to some back pain. His scores midway through the tournament (49 and 49) were nothing to shake a stick at; so any conspiracy theories of dropping out due to poor play are baseless. Besides, people who’ve seen Locastro play knows how competitive he is, and the phrase “give up” is not a part of his vocabulary. In any case, he came back to his home turf for the St. Louis Open this weekend and took first place, beating out his 1035+ rated NSDG counterparts Leiviska and Schusterick (D. Feldberg was playing a different A-Tier in Huntsville, TX).

After seeing Cale Leiviska win two consecutive tournaments earlier this spring, and then seeing Will Schusterick do the same, Nikko Locastro stepped up and grabbed the torch, so-to-speak. If this holds true to pattern, the Non-Stop-Disc-Golf crew should be watching Nikko win next weekend at the Charlie Vettiner Open (however we don’t see Nikko’s name on the reg. list) and next in line should be Dave Feldberg to win a pair of tournaments. Although, looking forward- the middle of May brings most, if not all, the top notch pros to Santa Cruz for the Steady Ed Masters Cup National Tour stop. It certainly isn’t a stretch to imagine a member of the NSDG crew winning the Master’s Cup, but their competition will be stiff. There are two Santa Cruz area natives still searching for their first big wins of 2012 in Avery Jenkins and Nate Doss, and they are anything but push-overs. This season of PDGA tournaments has been interesting with it’s good amount of roster-variety at the top level tournaments. There seems to be three to four clusters of 1020+ rated players dividing up around the US to play major A and B-tiers. As the year shakes out, time will tell which (if any) National Tour stops get the cold shoulder, and which top players decline the tough travel required to play every one.

One thing is for sure, Nikko Locastro will be playing a lot of disc golf this season, and he’s likely to win a handful. If he isn’t playing ‘this tournament,’ it usually means he’s playing ‘that tournament.’ The solid play of his friend and NSDG travel buddy, Will Schusterick, is shaping up to provide fans of the PDGA pro circuit with perhaps one of the best rivalries since Climo and Schultz. …but in the same breath it seems more likely to be a three-way rivalry with Paul McBeth always in the mix for the top prize. Can a rivalry have three different sides? It looks like we’ll have to settle for a “TRI-valry.”